The 9 Lives of the Key West Cat Man

“Come over here...stay where you are!”

Dominique Lefort struts around his little corner of Westin Pier, next to Key West’s Mallory Square each evening just before sunset, encircled by a crowd of onlookers, spewing existentialist contradictions with a heavy French accent and a maniacal laugh, his clown-like movements so energetic that even Jerry Lewis would consider them over-the-top.
“Hurry up, take your time!”
At first, you might easily dismiss him as just another hammy street performer....that is, until he releases his pets. Then, this crazy Frenchman, with all his eccentricities and exaggerated theatrics, becomes a veritable Pied Piper of kitties! His brood of about 8 or so felines enthusiastically follow his every command, jumping through flaming hoops, sprinting through the air onto hand-held stools, and many other fanciful feats, in what may well be Key West’s most fascinating and unusual show: Dominique and His Flying House Cats. 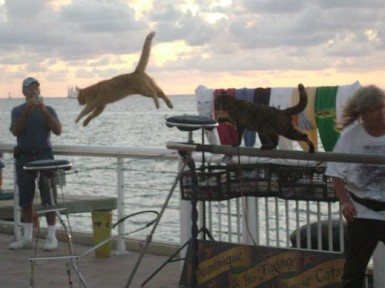 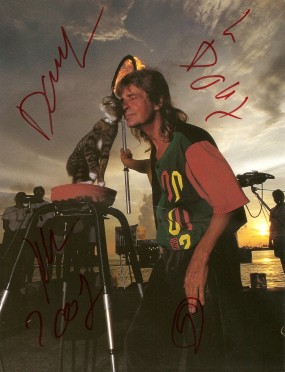 Dominique, a native of Brittany, France, first arrived in Key West by way of Montreal, Canada, in 1984. His entrée as a cat trainer had come some years before, by way of his daughter, Vanessa. As a little girl, she was fond of her black and white kitten, Chaton, but apparently delighted in pulling its tail. Chaton ran to Dominique for protection, and it was then that he realized his talents for captivating these aloof creatures. Chaton soon became part of Dominique’s clown act, and thus was borne a collaboration so unusual, it’s virtually unknown anywhere else. As new residents of the “Conch Republic”, Dominique and Chaton’s successor, Marlene, found themselves in the big-time—a locale whose local culture outshined the most dazzling circus acts.
Dominique soon made good use of the island’s many stray cats. They came to him to him from all over, often previously abandoned, abused, or orphaned by hurricanes. He took them in, and they repaid him with a degree of gratitude only street urchins could muster. It’s true—these cats are in it for more than just the odd treats he throws their way: they welcome him, with twitching tails and enthusiastic meows, as one of their own. Today, his work has been featured on Animal Planet, PBS, and in a documentary DVD directed by Patric Bateaux, French creator of the L’Oreal ads.

My initial skepticism at the beginning of his sunset show quickly melted into rapt fascination as his protégés, Oscar, Cossette and friends cat-apaulted through the air.  “You can do eet!” he coaxed them.  “Eet’s all in your minnnd!” And then, the icing on the cake: Dominique selected me from the audience to help him secure the pole he uses for his kitty high-wire act! ”Come over here, take your seat!” he yelled.  I didn’t know if I was coming or going…

Later that evening, while my friends and I were dining at Cheeseburger Key West on Duval Street, I mentioned to our waitress that we’d seen the show, and she replied that when she runs into Dominique in the supermarket, he strokes her shoulder in round motions, his fingernails digging. “It’s no wonder he gets along with them so well,” she mused. “He’s just a big cat himself!”
Douglas Eames is a freelance writer, homespun philosopher and budget bon vivant living on the sidelines of the excitement of South Beach.

Afterwards, he presented me with a signed picture, with a scrawl almost as indeciperable as the man himself, but nonetheless, a souvenir which I’ll always treasure. 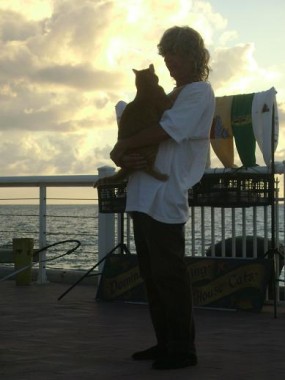