Their lives began precariously, and now the three hurricane kittens dangle nightly on a taut rope, the newest performers in Dominique LeFort's Flying Cats show at the Hilton dock. The three Kittens were part of a litter born under LeFort's girlfriend's porch a week after Hurricane Georges pummeled the Lower Keys. Now, the 3 month-old-kittens -- Georges, Chopin and Mandarine -- have joined his act. Their tightrope scene is really just natural kitten play. "It's not really the training, but the getting used to crowds," LeFort said of getting the three ready to perform. He found that out with the first cat he trained 20 years ago when he and his family lived in Montreal. Chaton bolted before his first performance when he saw all the students sitting in the school auditorium. 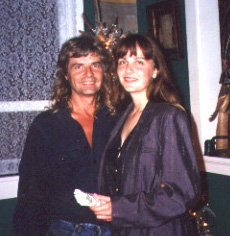 Dominique LeFort performs his cat-through-fire-hoop for a crowd gathered at the Hilton dock.LeFort didn't start out as a cat trainer, but as a clown in the European tradition. He grew up in Brittany, France, but left for North America in 1967.
An animal lover, LeFort incorporated his 5-year-old daughter Vanessa's pet into his act 20 years ago. Vanessa wanted the black-and-white kitten, but she loved to pull Chaton's tail."So the cat came to me for protection," said LeFort, who quickly realized Chaton would be a great addition to his clown act.But after two years of performing together, Chaton was lost.
Six years later, Vanessa saw another cat in a pet shop. Again she asked her dad for a cat.LeFort said no -- until he looked into Marlene's eyes."She became my star," he said.She was still his star when he moved to Key West in 1984, and the show became a full-blown cat act.

One of LeFort's stars keeps the crowd's attention while on hind legs.The cats have paid Vanessa back. With the money the shows brought in, LeFort sent his daughter to UCLA where she earned degrees in mathematics and physics. By the time she went to Cornell University for a master's in physics, her grades paid for her tuition, but the cats still paid the extras.She received her master's at age 24. "All the money I made [at Mallory Square] went for her," LeFort said.
He lives in a motor home in the Lower Keys. Vanessa spent her teen years living with her mother in Los Angeles, but she often visits here. "Without her, I wouldn't have any cats," LeFort said.

LeFort didn't abandon the clown style when he switched to cat performances.He incorporates exaggerated motions into the show to make the children laugh, and satire to make adults laugh. Though with his accent and the subtlety of the jokes, only a small part of the audience catches the humor.
The new kittens join Oscar, Cossette and Piggy and Sharky, who have performed all of their 14 years, and 4-year-old Sara.
LeFort with three new additions to his act born during Hurricane Georges.  The kittens- Chopin, Mondarina and Georges- are now in training.  Each night LeFort gets his budding performers acquainted with the crowds by letting them dangle on a rope during his popular act at the Hilton dock.LeFort has toured North America with his cats. He has worked for Disney and performed at New York's Madison Square Garden and a large music-crafts festival in Branson, Mo.
PBS did a special on him 10 years ago, which airs twice a year. And he has been on Animal Planet.But it's his Key West show that is closest to LeFort's heart. "Here is better than a circus," he said. "Here you need to do more. You need to put an act together."